Meet the team behind Knit Your Dog!

Jeannie and the Squad

I am descended from knitters and dog lovers. 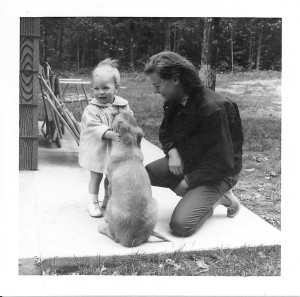 This is me as a toddler. The dog is not mine, not that it mattered to me. The lovely woman on the right is my mother, who knitted fair isle sweaters freehand when she was a teenager in Glasgow. She taught me English knitting when I was five. My father’s mother, born in Switzerland, taught me German knitting when I was 8.

Big Charley and me

My first dog, Big Charley, was a German Shepherd. My second dog, Black Charley, was a Lab. Buddy, another German Shepherd, followed soon thereafter. For some reason, I have always been drawn to Chow Chows, and fate has delivered two Pekingeses into my life as well, along with a chinchilla rabbit named Mozart, numerous cats (my ocelot-like torty Sally currently in the mix), goldfish and turtles.

My pack, currently my Chow mix Kaya and Sally,  and I split our time between the Chicago area and the Sacramento Mountains of southern New Mexico. 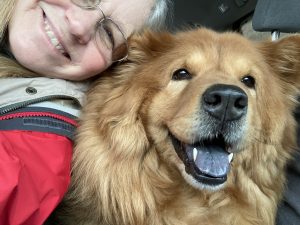 Jeannie and Kaya, the current team

The team has been featured on a number of programs and online outlets. Here are a few videos: