Home fiber The Wonders of Oils for Dogs’ Coats

The Wonders of Oils for Dogs’ Coats

We all know a healthy coat when we see one; it’s shiny, full, and begging somehow to be touched. We have a special appreciation for healthy coats in our business, because a healthy coat makes a great fiber. Great fiber spins well and knits well. There is just nothing like it for us.

A gorgeous dog may or may not produce great wool, and what is more, great wool can become even greater if the dog’s health is improved. I’m not going to go into a discussion here of canine diets, and as with all other information on this site, nothing here should be taken as anything more than information, but I will share my own insights on how oils have boosted the quality of a dog’s hair.

My beloved Shadow will serve as my demonstrative example here. When I first saw Shadow, it was in this photo from the shelter where he had just been surrendered: 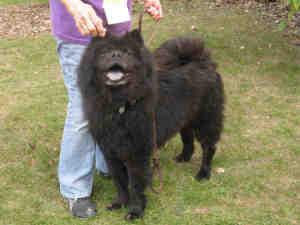 Obviously, he was a gorgeous dog, and a pretty happy boy, too. I met him about a month after this photo was taken, when the great souls at Wish Bone Canine Rescue had accepted him from the shelter (they had had no luck finding him a home and they wanted Shadow to have a better chance than they could offer). Wish Bone got him into a foster home and they got him groomed (they told me he was pretty matted and had to be clipped a bit). The night before we met, Wish Bone sent me this picture (quite a feat, as Shadow is VERY camera shy):

Sure he’s beautiful! But a close look shows that black color is rather matte in its finish. Of course, he had been in a shelter for a month, and Chows do really poorly in shelters. He was more than 10 lb underweight, and when I write this I mean absolutely no disrespect to shelters or fosters, but the diet he did consume needed some supplementation.

No surprise to anyone: I’m one of those dog people. My dogs (and my cat) often get better care than I do. I’m on a first-name basis with more vets than I can count. So my other dogs already had supplementation plans, and one standard addition had already been coconut oil. This oil contains medium-chain triglycerides that have been shown to reduce inflammation in some humans with lower GI conditions. My holistic vet had found that it just seemed to do wonders for the overall health of dogs. So a half teaspoon went into his dish every day. As he gained weight, he gained sheen as well. I still noticed a bit of dry skin, however.

Not long after that, one of my other dogs was stricken with a terrible bladder condition, and his entire diet had to be changed. A nutritionist suggested salmon oil for him, along with an arsenal of other supplements. The change in Clarence was massive, rapid, and life changing. I realized that my other dogs would likely benefit from some of these. Reading reviews and articles about salmon oil, I found heavy anecdotal evidence of reduced skin issues and healthy coat. So everyone in the family got salmon oil.

After a couple of months, the change was unbelievable. People on the street commented on how shiny Shadow’s coat was, and it really was striking. But the most ringing endorsement came from Linda when she started spinning it. Shadow’s hair practically cards itself. The shafts are strong, but incredibly soft. The length is

improved as well. Even in winter, the amount of skin flake is greatly reduced. I posted a photo of Shadow on vacation to Wish Bone’s Facebook page and his foster family commented on his improved coat as well!

We watched this transformation repeat with Chloe, the latest addition to the KYD Shed Squad. The shelter that had accepted her surrender had been told that she had a skin allergy, and while at the shelter she had chewed off all of her tail and her rump from stress. Once we got her major health issue squared away, we got to work on her diet. The kibble she had been fed was entirely unsuitable for a dog of her size, and it turned out that she had no allergies; she had just been neglected. Adding the oils to her diet, along with a solid nutritional base, had a similar effect. Over a few months, we noticed not just additional shine, but we also saw the color of her coat intensify, and her wool, which grew softer, also enriched in hue. I can only describe it as a change from a latte to a cappucino. And she has never chewed her tail or rump.

Now: has adding oils for dogs coats reduced shedding? Not that I have seen. I have read numerous customer reviews reporting reduced shedding. The supplier I use claims that salmon oil reduces shedding. I have seen nothing to suggest that shedding is reduced in any of my dogs. I brush my dogs a lot, for obvious reasons. I would love it if they shed less. But they do not. I still vacuum constantly, regardless of the season.

Bottom line: we have found that oils for dogs’ coats can be very beneficial. We suggest you talk with your veterinarian about how fish and plant oils can improve your dogs’ coats, and the quality of their lives.

This site uses Akismet to reduce spam. Learn how your comment data is processed.